As the Japanese technology company enters into the 100 ppm segment of digital production presses, with the launch of its new Bizhub presses C1100 and C1085, Konica Minolta in India is on a high. Since the company set shop in India in 2010, it has more than 50% of the market share in the segment, with more than 2,000 production engines in the market.

“Our focus has always been productivity, quality and ROI,” says V Balakrishnan, executive general manager, marketing, marketing division, Konica Minolta India. “We are Numero Uno in number of machines installed and volume generated on the machines.”
Next in the Konica Minolta agenda is to upgrade printers to the next level of printing. The recent launch in November is just the beginning. And, there is a reason for this, Balakrishnan explains, “As the Indian economy opens up to more brands, brand managers will transfer their jobs to the Indian market. If our machine users cannot make use of these advantages, then what is the point?” 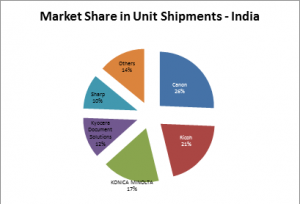 Konica Minolta is doing its bit to educate the customers. “In the Indian market, colour means different things to different people. There is no standardisation of colour,” says Balakrishnan. This is one of the reasons why Konica Minolta set up a Digital Imaging Square (DIS), where printers can come and witness various different ways of doing the job. “Our plan is to enable printers add value to the jobs and do it cost-effectively,” he adds.
PrintWeek India met Balakrishnan at the Digital Imaging Square located at Konica Minolta India headquarters in Gurgaon. It also has centres in Mumbai, Chennai and Bengaluru, which offer training facility with at least one engine.

After making its presence felt in tier-1 and tier -2 cities, the company now wants to penetrate tier-3 cities. “We conducted five colour seminars in Delhi and Mumbai,” says Balakrishnan. “In Mumbai, the event was attended not just by our customers but also by people from the advertising field. Job expectation varies from customer to customer. The participation learned about execution of jobs from the stage of imagination to final product, in an operational way.”
The next step is PrintPack 2015 in February. “We have never attended a trade show on our own. Usually, our products are showcased by our four Indian partners,” says Balakrishnan. “This time, however, we will be there as well, not in terms of sales, but in terms of the technology we offer.”

The customers are an integral part of Konica Minolta growth story. “Most of our developments happen on the basis of our interaction with our customers,” says Balakrishnan.
Highlighting the future of digital presses, Balakrishnan says today the effort is to replicate the quality achieved in offset in the digital platform. “For this, we have  a workflow like EFI and Creo. We have our own controllers and are strengthening our workflows,” he says. The efforts have paid off with more and more customers adopting to these changes.

In India, however, utilisation is a challenge, says Balakrishnan. He says printers have failed to achieve the full potential of the machines, as they do not evaluate their print production, whether it is good or bad. “A slight differentiation in work can make the profits double,” he says. “A focus on quality, as compare to volume, will help them make more money.”
Coming back to Konica Minolta’s training programmes for printers, Balakrishnan says, “Our endeavour is to encourage people to put value in production. We encourage them to do small things differently. We invested close to three million dollars in the our DIS and support centres, only to provide more value to our customers.”
Started in 26 June, 2013, the DIS has been a success. Balakrishnan says some customers arrive at the DIS for half-a-day and end up spending three days. They return home with additional information. “Our training is customised where customers come in with their own media and files.” Most of these customers are referred to by the four Konica Minolta partners spread across the country.

Talking about its partners, Balakrishnan says, “You always have a choice to go directly to the market or go through your representatives. Our partners are all well established and the entire market is covered by them. We do not differentiate between a partner and an employee. We support them directly whenever they require. The training module and certification process is same for everyone whether he is KM employee or a partners’ employee.”
But training customers isn’t easy. Hence, Balakrishnan says the training schedules are different for person-to-person and machine-to-machine. But it works. “Around 30 to 40% of our machines went to people who are first-timers, starting with entry level presses.
That’s the reason why Balakrishnan says, rather than attending exhibitions, we spend more time with customers across the country.  “The marketing team has a punishing schedule to meet as many customers as possible catering to varying segments.  These interactions are the windows for us to know about the need of our users, and they come up with more and more demands every time.”
This is perhaps why Konica Minolta is doing well in India. Balakrishnan says compared to others, in terms of performance and technology, Konica Minolta engines have been embraced by the India customers. “We also expect the newly launched engines, C1100 and C1085, to do well as they offer a unique combination of Productivity, Quality and ROI,” he adds.

Balakrishnan says 30% of KM customers are from the commercial market, and most use small engines.

The Digital Imaging Square (DIS) in Gurgaon
Future of digital

On the future of digital, Balakrishnan says inkjet is still evolving and soon inkjet will play a bigger role. “The challenge now is to gauge how major the role will be,” he says. “Paper size, productivity and price are the three key points in this business. Getting all the three right is a challenge. We have expertise in inkjet print-heads. We are also working with Komori for hybrid presses.”
Focus is on digital. “This year we have refreshed our entire line-up on Light and Mid-Production with new models : C1060/1070 and C1100/1085,” he says.
Another thing Konica Minolta values the most is the environment. “The new engines are more greener,” says Balakrishnan. “Perhaps, we were the first company which adopted Open Loop System of Recycling, while most of the other people adopted Close Loop System.”

He concludes, “Our commitment to a Greener Planet is paramount.”